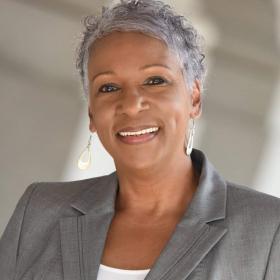 Director, KLT Board of Directors

Dina was born and raised in Kingston, NY and recently retired after a 35 year career with United States Postal Service, much of which was spent managing the Uptown Kingston Post Office.  She is currently a member of SAG-AFTRA and enjoying her second career in the performing arts acting in movies, commercials and as a commercial and print model. Dina is a founding member of a liturgical dance team called "One In The Spirit" as well as "New Vines Strong Roots" which is a group who organizes reunions of families and friends, inviting former Kingstonians and their families to come home for a weekend celebration and making it a point to introduce and pass stories on to the younger generation.  Dina is also a former mentee and employee of Professor Benjamin Wigfall, who owned and operated Communications Village in the 1970's - 1980's in the Ponckhockie neighborhood. She is also a member of Beulah Baptist Church in Poughkeepsie, NY. In her free time she enjoys spending time with her grandchildren, walking, working out, dancing, entertaining, arts and crafts and traveling the world.

Director, KLT Board of Directors