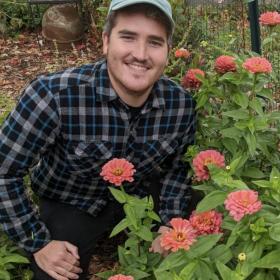 Originally from Syracuse, Ted moved to Kingston in 2014 after graduating from SUNY New Paltz, where he majored in International Relations with minors in Black Studies and Spanish. Ted first became acquainted with the KLT as a volunteer at the South Pine Street City Farm, and has been involved with various urban agriculture and community garden projects in Kingston since then. In 2017 Ted was hired to support administration and operations of the KLT, and remained until leaving to pursue other opportunities in 2021. After a year working as a Program Associate at Bard College’s esteemed Graduate Programs in Sustainability, Ted has returned to the KLT as Managing Director, a role in which he provides operational oversight and organizational leadership as a member of the Shared Leadership Team. Ted serves on the Conservation Advisory Council for the City of Kingston as well as the Environmental Management Council of Ulster County. He is also the co-owner and business administrator of Gab's Veg Table, a vegan food pop up and catering business in Kingston with his partner.