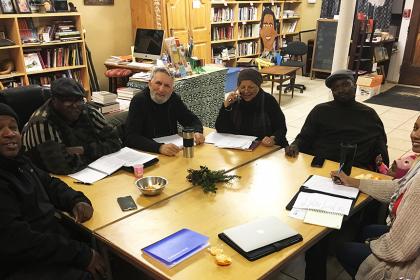 February 11, 2019 (KINGSTON, NY) — The Kingston Land Trust (KLT) is working to purchase a property that contains a forgotten historic African Burial Ground in Uptown Kingston. The purchase would be a short sale to avoid the risk of it being put back up for auction. Once secured, KLT will work with Harambee and the community to restore the site and open it to the public as an interpretive center for education and reflection. “Through the struggles and mistreatment of our ancestors and allies, we are united in the fight to give them peace and freedom in their death,” says Tyrone Wilson, Executive Director, of Harambee.

In November 2018, this property was slated for auction, but the bank’s loan servicing agent pulled it when the KLT informed them it contains an unrecognized burial ground. It is now being temporarily held with the expectation that the KLT will purchase it in the very near future. The KLT has completed all of the due diligence on the property to prepare for purchase, including surveying, inspection, title report and environmental assessments.

The Kingston Land Trust has committed $40,000 of its own funds to cover the pre-purchase, closing costs, and part of the purchase price. The bank’s loan servicing agent has set the price at $127,500. Harambee’s Protect the Pine Street African Burial Ground Coalition aims to raise an additional $160,000 to help the KLT cover the purchase as well as to shore up the existing building against further deterioration.

More than 125 years ago, this burial ground was portioned off for private ownership when the borders of the City of Kingston expanded into the surrounding rural area. Its existence has not since been officially acknowledged despite robust historic documentation and the findings of human remains of African origins. Recently, staff at SUNY New Paltz’s Geology department used ground-penetrating radar to survey the site: The results indicate countless graves onsite that have long been ignored.

Just as the African Burial Ground National Monument was established in New York City after human remains were discovered, the Coalition asserts that this land in Kingston should receive due acknowledgement as part of the erased history of the black experience in the Hudson Valley. The Coalition feels this effort is especially poignant since 2019 is the 400th anniversary of the arrival of the first Africans to be sold into bondage in North America.

Involving the Community to Protect and Heal

Numerous residents remember the previous attempts of other groups to protect this site and want to see it resolved once and for all. “The Kingston Land Trust led the re-dedication of the Mount Zion African American Cemetery on South Wall Street in Kingston in 2011 and now with new capacity and leadership, we are able to take on this significant protection effort. We are calling on the community to join us,” says Julia Farr, Executive Director, KLT. “This is an important moment in history where together we can help to right the wrongs that have been perpetuated on this site and in this country.”

The KLT and Harambee have hosted three meetings—one with neighbors of the burial ground, one with aligned organizations, and one with the broader community. Their next informational and fundraising event will take place at Rough Draft in Uptown Kingston on Monday February 18th between 5pm and 7pm, and is open to the public. Rough Draft will be donating to this cause a percentage of sales for any purchases made throughout the day.

City of Kingston Elected Officials Offer their Support for this Effort

“So much of who we are is derived from our history, both good and bad,” says Bill Carey, Alderman, City of Kingston. “Preserving this sacred ground will go a long way in helping make people whole.”

"I applaud the efforts of the Kingston Land Trust, Harambee, and local community members, all of whom are working together to protect this historic burial ground," says Steve Noble, Mayor, City of Kingston. "We cannot allow this sacred space to be forgotten any longer. I am committed to helping with this important preservation effort in any way the City can and re-dedicating this property as part of a critical healing process for our community."

For more information on the history of the site, read the report by local archaeologist, Joseph Diamond: Owned in Life, Owned in Death: The Pine Street African and African-American Burial Ground in Kingston, New York.

To view media coverage of this initiative, visit our Press Page

The Kingston Land Trust is 501c3 nonprofit organization that protects, creates access to, and activates land for the common good.

Harambee is a 501c3 nonprofit organization whose goal is to bring the community together through celebration and awareness of African American History.